In November of 2018 I wrote a post called Into the Breach around the circumstances of my return to wordpress, and my initial goals for the site. Those initial goals have been met, the Ko-Fi has met minor success, I’ve managed a decent array of articles, and both of my RPGs are in playtest-ready form. I had some off periods and long stretches where work on the RPGs meant that I wasn’t writing Eliph or Fear the Swarth articles, but by and large I’ve proven to myself that I can maintain consistent writing output.

So the next step is monetizing that output. The Ko-Fi works for one-off donations, but in terms of a revenue stream I need something more consistent. As such, I’ve started a patreon.

END_OF_DOCUMENT_TOKEN_TO_BE_REPLACED

I’m a huge fan of Dimension 20. A good friend pointed me at Fantasy High and I’ve been hooked since. The cast is great, Brennan is one of the best Actual Play DMs I’ve seen, and the production is gorgeous. One of my long term goals is to run one fight in Lancer with the production values of a single Dimension 20 combat.

So I watched and greatly enjoyed Tiny Heist. But its finale brought up an issue familiar to many in the TTRPG scenes. Namely, during the climactic Heist, the fact that the game was Dungeons and Dragons was a detriment to the way the game was played. The game would have played more cleanly were it in a system better suited to heists, as shown by the car chase that follows which does play more cleanly.

The basic reason for this is that Dungeons and Dragons does not have a heist system and attempting to play out a heist using the existing mechanics kind of sucks.

This isn’t new to anyone in TTRPG writing or design, and is a common refrain in criticisms of Dungeons and Dragons and games like it. However, I feel like it’s a lesson more commonly espoused through insults and at odd angles rather than explained in a straightforward manner, something I hope to correct.

END_OF_DOCUMENT_TOKEN_TO_BE_REPLACED

Since 2020 rolled around, I’ve been to two Infinity tournaments. “8Ball’s Release Party”, which was in January in San Rafael, and Toss a Coin to your MERC, last month in Santa Cruz. Both tournaments were a blast and MERC in specific was eventful enough that I wanted to write about it.

END_OF_DOCUMENT_TOKEN_TO_BE_REPLACED

The Truth of Colonialism in D&D

There’s a tiny controversy in D&D land. A pair of people wrote a pretty great West Marches document with an excellent primer on Colonialism and Racism in Dungeons and Dragons, which you can find here. Unfortunately, someone else took umbrage at this primer and wrote an article trying to claim that the Colonialism never existed. You can find the reddit discussion on it here, and the comments section has some solid posts about why the article is, to put it kindly, deeply unconvincing. However, while the article primarily serves to illustrate the biases of its writer, there is still a valuable discussion to be had.

So let’s have it.

D&D is Colonialist. It has Colonialist roots it has never outgrown. That doesn’t mean the end of your game, or that everyone needs to boycott WotC. I do D&D freelancing, I’d be a bit of a hypocrite if that was my position.

What it means that you need to be aware of that and handle it in your game.

END_OF_DOCUMENT_TOKEN_TO_BE_REPLACED

Posted in Uncategorized. Bookmark the permalink.

In the late 15th and 16th Centuries, Swiss Mercenaries discovered something called Bad War. Titanic pike blocks, the premier military formation of the day, would clash, pikes locking together, each attempting to force the other to route through elan and mass and sheer violence. Men would simply suffocate, crushed against each other by the press of bodies, each formation would turn into a screaming mass of blood and violence. The result was brutal for all involved, especially after one side routed, and was so unpleasant even by the standards of late medieval warfare that observers termed it Bad War.

Bad War is more or less the standard approach of modern roleplaying games. And it’s making your combats worse.

END_OF_DOCUMENT_TOKEN_TO_BE_REPLACED

So it’s out. Been talking about it with friends and following the discourse on twitter and sufficient velocity since I saw it, and have been thinking about it more or less non-stop as well. I knew I wanted to write something pretty much immediately, even if I wasn’t sure what exactly it was. Was kind of averse to doing so because of the entire horrible discourse issue.

But I’ve been a fan of Star Wars since I was a kid, and while recent events haven’t marked the end of that they’ve marked a definite metamorphosis. I’m twenty-six, not exactly old enough to have watched the originals in movies, but my dad showed them to me and my brother when we were pretty young and they’re old favorites. I’m pretty sure I caught all of the prequels in movies and have fond memories of playing Rogue Squadron on Gamecube, reading EU comics and books, following the Tartakovsky animated series in the leadup to episode 3, and more-or-less twenty years of accumulated fandom.

And while that doesn’t make me different than most other western Scifi nerds, it’s still enough that I don’t think I can just turn up the chance to write this article.

So let’s talk about the Mandalorian! END_OF_DOCUMENT_TOKEN_TO_BE_REPLACED

Posted in Review, Stuff I Actually Like and tagged Islam, SciFi, Star Wars, Television, The Mandalorian. Bookmark the permalink.

It Was Never Yours

Sorry for the lack of updates last month, I’d signed up to run a game I’ve designed at Big Bad Con, and as a result had to put my nose to the grindstone to get it done and playable in time for the Con! Fortunately I’ve basically finished, and a playtest version of the game is up on DriveThruRPG and Itch.io. With that in mind, I encourage you to check it out and read on!

END_OF_DOCUMENT_TOKEN_TO_BE_REPLACED

Battle By the Beach

Last month I attended the Battle by the Beach, a two-day Infinity tournament at Mythic Games in Santa Cruz. It was my first Season 11 tournament and a hell of a way to kick off the season. I had a blast and, because I had a blast, I thought it best to share the results with all of you!

END_OF_DOCUMENT_TOKEN_TO_BE_REPLACED

The Science Fiction and Fantasy genres treat Muslims extremely poorly. When we show up we’re terrorists or racist stereotypes. Decadent harems, brutal terrorists, backwards weirdos, and worse. Orcs are thinly disguised as us to represent how the author is scared of brown people, aliens are associated with us to represent how the author doesn’t think we’re human, and always, always, terrorism and religious extremism are at the fore and put entirely at the feet of religion. Politics, economics, culture, and other factors that define the Muslim world are ignored. I haven’t even started on the news.

As a result, the SFF genres often don’t function for Muslim audiences. Stories that are meant to be about escape, about visions of the future, about warnings and social commentary, all-too-often end up being banal reinforcements of everyday bigotry we face on a regular basis.

For the most part, Infinity manages to avoid that. HaqqIslam is one of the better representations of an Islamic faction in Science Fiction by a non-Muslim writing team. It clearly tries, it presents a Muslim society that is genuinely pretty great without being perfect, it provides a variety of Muslim characters with their own stuff going on and has a bunch of extant conflicts to work with. It iterates to deal with problematic content in a way that indicates that the writing team cares about getting this right.

There are significant issues. You can see some of them here, where a cursory glance at Haqq lore by Muslims results in people immediately pointing out problems. While the faction as a whole is significantly better than those snippets the mistakes it makes are important to a Muslim audience.

The nature of those issues trends less clearly problematic than those of many of Infinity’s competitors. You don’t have Cthulhutech’s overt bigotry, nor Shadowrun’s decision to mark all of Africa under the control of cannibal ghouls. Instead, you have elements that are clearly issues for Muslims, and those knowledgeable about the history of those elements outside of Infinity, but seem like non-issues to non-Muslims who haven’t studied the Middle East or Orientalism. 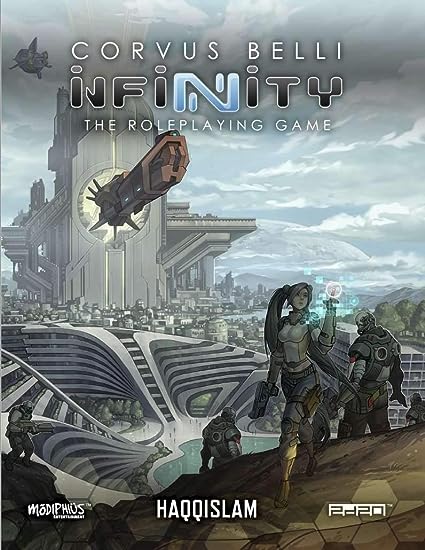 END_OF_DOCUMENT_TOKEN_TO_BE_REPLACED

Posted in Political Bullshit, Stuff I Actually Like, Tabletop Games. Bookmark the permalink.

“I could have become a mass murderer after I hacked my governor module, but then I realized I could access the combined feed of entertainment channels carried on the company satellites. It had been well over 35,000 hours or so since then, with still not much murdering, but probably, I don’t know, a little under 35,000 hours of movies, serials, books, plays, and music consumed. As a heartless killing machine, I was a terrible failure.

The Robot Wants To Be a Real Human is a well-worn story archetype, one I’m sympathetic too, but one that’s been played out and dissected well past the point of exhaustion. It’s been around since, at the latest, Pinocchio and has been examined and re-examined since. As such, when I started on The Murderbot Diaries by Martha Wells, and more or less until I was halfway through Exit Strategy, I’d kind of just assumed that this was what it was doing. It was an unfair assumption, and one that I feel dumb about in retrospect, and one that was unfair to the series.

Because the Murderbot Diaries isn’t quite a Pinnochio story. It doesn’t ask ‘can a robot be human’ but instead ‘what does it mean for a robot to be a self-actualized robot’ and that is ripe fodder for exploration.

The Murderbot Diaries follow Murderbot, a security android that overrode the code binding it to its human masters and that primarily wants to watch pirated media and not come to the attention of its corporate overlords. Things go wrong, there’s adventure, gunplay, and excessive amounts of corporate malfeasance, and pretty swiftly Murderbot is rogue. The plotting’s clever, the writing’s solid, and it’s big on themes of corporate malfeasance and injustice, but none of that’s really what I want to focus on in this article.

So instead I shall ask you to take me at my word. Murderbot is good: it’s emotional, it’s fun, and it has a lot to say about an interesting future. One where humanity has made enormous strides socially and technologically, yet is still embroiled by the same petty monstrosity and perverse incentives we’ve had since the invention of currency. The books are short but well-paced, and while the perspective can be weird and dry Murderbot is a treat to follow and a surprisingly endearing main character. If you want a yes/no on reading it and don’t want spoilers, I encourage you to pick up the novellas and finish them before reading on.

END_OF_DOCUMENT_TOKEN_TO_BE_REPLACED

Posted in Books, Review, Stuff I Actually Like, Uncategorized. Bookmark the permalink.

When I got into Infinity someone quoted me a go proverb. “Lose your first fifty games as swiftly as possible.”

If nothing else, I have excelled at following that advice. I have been absolutely destroyed by players vastly more experienced than me. I’ve been crushed by a veteran of the Interplanetario, the World Cup of Infinity. My weekly game is against a friend comprehensively more skilled than me. I have dozens of defeats, many of them crushing, some of them close. My victories have only recently become anything close to regular.

And I’ve been having a blast the entire time. 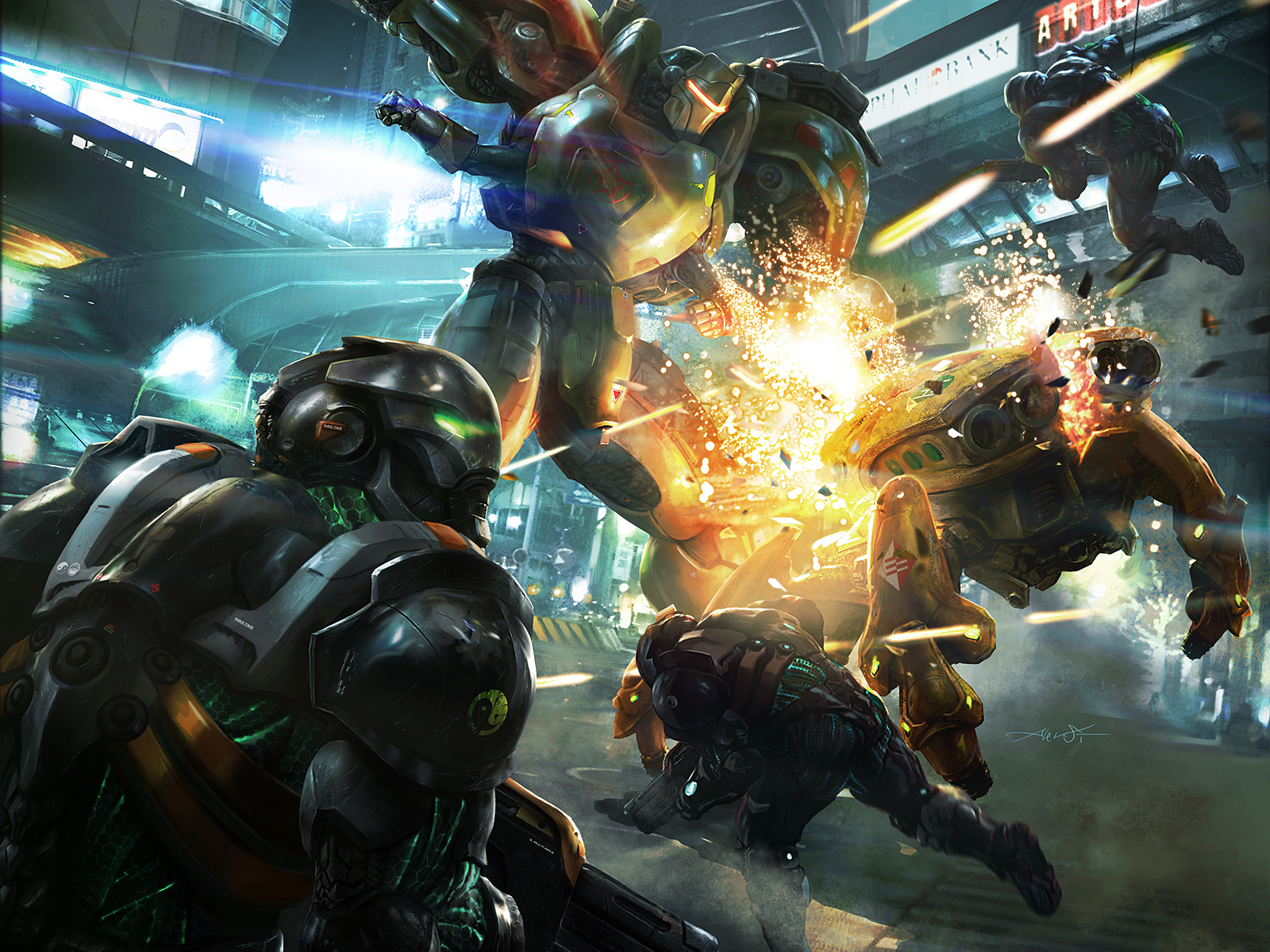 END_OF_DOCUMENT_TOKEN_TO_BE_REPLACED

Posted in Review, Stuff I Actually Like, Tabletop Games and tagged Infinity, Review, SciFi. Bookmark the permalink.
← Older Posts
→
Fear The Swarth
Create a free website or blog at WordPress.com.